Posted Mar 29 2013 by Sherri Meyer in All Stories, Blog, Eat Well, Be Well with 0 Comments

Posted Mar 25 2013 by Denise Simmons in All Stories, Blog, In The Kitchen with 0 Comments

The calendar says ‘Spring’ but will it ever arrive?!? When it does, here are some ways to save: sports & exercise

Will you take a small step to help?
Source: The Green Book

Posted Mar 19 2013 by Sherri Meyer in All Stories, Blog, Eat Well, Be Well with 0 Comments

I have come to the sad revelation that I have become a mindless eater. This discovery came late one night when I realized that every single thing I put in my mouth that day was done haphazardly while standing. Picking at the leftovers from my children’s plate, noshing on the roasted vegetables each time I walked by the stove and grabbing a few cookies while the boys ate dessert. To be fair, I spend half my day feeding 3 hungry boys, which doesn’t make much time for a relaxing meal. However, this is an excuse that I can no longer justify. Breaking this habit is proving to be much more challenging than I anticipated. My new “rule” is to no longer put anything in my mouth while standing and no eating in front of the computer. I started this morning at breakfast; following this self imposed rule proved to be challenging and I constantly had to stop myself from mindlessly putting something in my mouth while I hurriedly fed the boys.

Hopefully a few “mindful eating” tips will help me in my new goal:

While many of these tips sound like common sense, even for nutrition professional like myself, it is always good to have reminders.

Weekly Wisdom – Food Rules: Shop the peripheries of the supermarket & stay out of the middle

Posted Mar 19 2013 by Sherri Meyer in All Stories, Blog, Eat Well, Be Well with 0 Comments

Trash Talk – Do you file a tax return?

Posted Mar 18 2013 by Denise Simmons in All Stories, Blog, In The Kitchen with 0 Comments

Do you know someone who files? (parents? friends?) e-file & direct deposit – please!
It’s quick–and secure - get any refund due back from the IRS electronically, instead of waiting for a check to arrive by mail.
Save paper & other resources, going & coming! – About $135 billion in tax refunds is still printed and mailed to individuals, which means printing checks and stuffing & mailing about fifty four million envelopes. What great opportunities to SAVE!

Will you take a small step to help?
Source: The Green Book

Posted Mar 5 2013 by Denise Simmons in All Stories, Blog, food tips, In The Kitchen with 0 Comments

On the menu at home this past weekend was beef stew (Sunday was the perfect day for it!) and bread of some type.  The stew was pretty traditional-I used sirloin tip because it’s so lean & gets really tender when braised.  I always put in a lot of onion-typically I brown one medium onion with the meat, and another onion in with the vegetables.  I like to roast the vegetables separately, then add them to the stew.  It’s a little more time consuming, but it gives the stew more depth & adds a little sweetness.  In addition to the onion, I used carrots, celery, turnip & potatoes, along with a snip of fresh rosemary from my window herb garden.

The sauce for the stew started with beef broth, made from base.  I don’t know why bases aren’t available at the retail level like they are for food service.  To me they’re far superior to bouillon cubes (YUCK!) or even the packaged broths that are now available.  They’ll do in a pinch, but you can’t control the flavor & sodium levels like you can with base.  The secret ingredient in my stew is Campbell’s cream of tomato soup.  About 1 can (undiluted) added to a gallon of broth adds great flavor & helps thicken the stew.  Oh yeah, and don’t forget to deglaze the pan you sauté the meat in with a little red wine.

But it’s really the bread I wanted to mention.  I’m embarrassed to admit that, after 30 years in the food biz, I’m afraid of yeast.  I worked with it a little at school, but I don’t think it counts when there are 13 other students making the bread with you.  I’ve shied away from it since, but decided it was time to get over myself & give it a shot.

I searched for a simple recipe online (amazing how many hits you get when you type in ‘simple bread recipe’!)  I absolutely loved the instructions written by The Simple Homemaker (http://www.thesimplehomemaker.com/simple-bread-recipe).  I giggled several times as I read through the recipe.  The part about kneading was very helpful, even though I used a different recipe (I wanted one with a little sugar & oil-hers is just yeast, water, salt & flour):

“Knead until it is as smooth as a baby’s bottom. If you have no baby’s bottom at hand to compare it to, give it the stretch test. Hold the dough up to the light and stretch a portion of it. If you can see light through it before it breaks, congrats! You’re finished”

Being a novice at bread making, it was a simple test I could use to judge whether or not I’d kneaded enough (I didn’t have a baby’s bottom handy).

The rest of the process was pretty simple-let it rise, punch it down, form it, let it rise again & then bake.  There is NOTHING more comforting then the smell of baking bread!  It came out delicious, and I was pretty impressed with myself on the texture of the bread. It was soft inside & had a great crust on the outside.  All in all a great experience for a first timer!  I think I’ll try it again…maybe cinnamon rolls for dads birthday….

Benefits of the mediterranean diet

It may make you say “oh we already knew that one” but when the latest study came out confirming the benefits of a Mediterranean diet I breathed a sigh of relief.  The world of medicine & science often seems like a lesson in contradictions often leading to mistrust or disbelief in the general population about health & good nutrition. But no one can argue that a diet devoid of nutrients (i.e. processed foods in our diet) is not beneficial for our health.  The Mediterranean diet is rich in beans, fish, lean proteins (very little red meat) fruits, vegetables and heart healthy fats like olive oil, canola, nut butters, etc.  Also important to note is that while it includes carbohydrates like rice, pasta and bread they are in the whole grain (meaning 100 % whole) versus the refined (i.e. removed) we include so often in our diet. 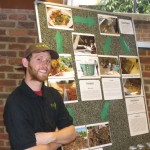 Sustainiability Work Study student Nate Secrest put together this mobile exhibit (living in The Grill right now) that explains each step of the composting process here at Guilford. There are some great shots of composting in action, and even samples of some of the finished products. Swing by The Grill to check it out!